On 8th August 2005 the New Zealander Rob and Lynn Ashton began their European tour. Their aim was also to attend a ceremony in Weiswampach. The operator-Oberleutnat Whelan HAZARD was the uncle of Lynn. Their first stop was Brussels, where they met the Ambassador Wade Armstrong and his assistant Pamela Stewart in the New Zealand Embassy. On it the following day, the came by train to Luxembourg and with a rental car, they reached Weiswampach. The next day, they visited the village Daleiden in Germany where Whelan was buried first. (Whelan, who was separated from his crew and he was with other bodies that had crashed transportedfrom Lieler to Weiswampach. German soldiers wore these bodies then from Weiswampach to Daleiden where they were buried.) They also visited the village Lieler and later Ouren in Belgium. The Mayor of Weiswampach opened the ceremony with a speech that was translated into English by his daughter Joëlle, this was followed by a speech by Lynn Ashton, the New Zealand Ambassador Wade Armstrong and the Represented by Te Atatu Memorial Rsa Peter Mason. At the end of the Hôtel-Restaurant Keup invited the guests to dinner 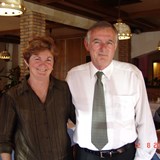 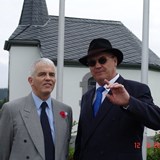 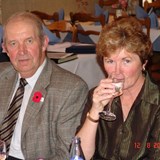